Tequila Ocho Reviews – (One of my Favorite Brands) 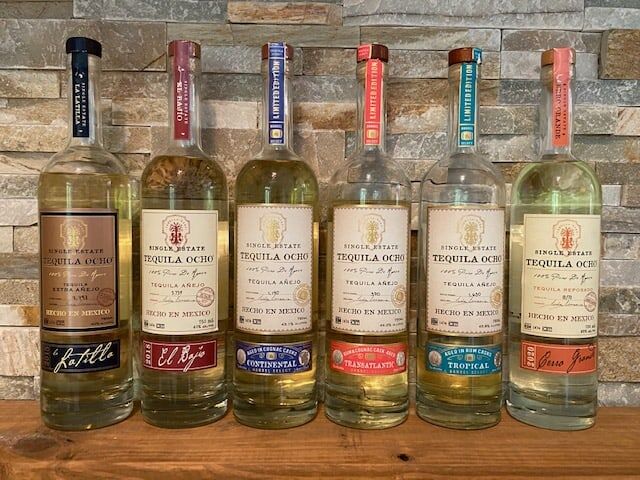 Mexican culture is world renowned for Mariachis music, world-class cuisine, art and beer, but many best appreciate its unique contribution to culture as represented by tequila. This unique liquor is made from the agave plant, and brewers have distilled the liquor for hundreds of years. Only recently, however, has the beverage been accepted as an international favorite. During the last half-century, interest in tequila and agave has skyrocketed, and one of the reasons is the fine products produced by the Ocho label, which was started by the Camarena family.

Carlos Camarena currently owns the Ocho brands, and his La Alteña Distillery produces Ocho and Tequila Tapatio, which is a more traditional brand of tequila. The family has owned the brand for 77 years, and they have carved out a special place in Mexican culture and international spirit manufacturing.

Camarena partnered with Tomas Estes, a well-known restaurateur who oversees global promotion while Camarena focuses on distilling the liquor. (Sadly, Estes passed away in April of 2021.)

The other brand, Tequila Tapatio, uses traditional distilling techniques that produce a consistent flavor. Modifying the flavors for consistency is not done for Ocho tequilas because the brand celebrates the differences in flavor for different vintages and agave fields. Ocho Tequila is the first tequila that identifies the fields and vintage as is the case with fine wines and spirits.

The family distillery, La Alteña, has been owned by the Camarena family for 77 years. Located in the highlands of Arandas in Jalisco, Mexico, the distillery manufactures two distinctive brands of tequila. Tomas Estes, who has built a reputation for serving top brands of tequila in his Mexican bars and restaurants since 1976, works tirelessly to promote the Ocho brand as a guest speaker for educational groups.

Both men have achieved singular success in their respective tasks. Estes has extensive contacts in the hospitality industry and often speaks at gatherings of tequila connoisseurs. Camarena has built a solid reputation as a Master Distiller and received the following awards and recognition:

The joint partnership between Estes and Camarena gained considerable respect from the hospitality and distilling industries. Agave has a unique flavor profile, and the notes can vary considerably based on the location, weather and soil of individual agave farms throughout Mexico. Agave has a basic flavor reminiscent of peppery greens and earthiness, highlighted by a touch of caramel. Each farm origin produces different flavor notes, a situation that makes each bottle of Tequila Ocho unique like fine wine vintages.

Below you'll find my personal reviews and tasting notes from some of the best Tequila Ocho produced.  Since this is one of my favorite brands, I try to sample every expression and release. Made by the Camarena family for three generations, most family members take an active role in production or promotion of their brands, which to me is the truest form of a family business.

‘Terroir’ is the French term used to refer to any natural and influential elements that have an effect on agriculture.  This term is used frequently with grapes and wine production.  Elements that can affect the production include altitude, climate, soil composition, amount of rain fall, and other environmental elements such as rain, wind, sun, and humidity.

Much like growing grapes for wine, this concept flows into the production of tequila and exists in the process of growing agave.  In Jalisco, the largest tequila producing State of Mexico, you'll find that there are two distinct regions that grow agave for tequila production.  They are “Los Altos,” and “Tequila Valley.”  According to the Tequila Ocho website, anything made in the Tequila Valley are “more masculine, forward in flavor, and have a more earthy, peppery and herbal taste profile.”  On the other hand, the agaves grown in Los Altos that are made into tequila are “more feminine, softer, rounder, more fruity, and floral.”

I'll definitely be paying attention to the maps as I sample new tequilas and am aware of where they come from.

What makes Tequila Ocho special is that they use a lot of single fields, which they call Ranchos, which is similar to the way a fine Burgundy wine is made.  Tequila Ocho has released limited edition tequilas from various Ranchos each with different names.  Lower down in this review you'll see a list of them.

When I taste the Tequila Ocho Blanco expression, I often get the pepper and citrus notes.  It's actually a very clean, peppery finish. If you look around the web and read other tequila reviews, you'll see that any negative reviews mention a somewhat flat flavor with an aftertaste of anise.  While I'll never turn down a glass of Tequila Ocho Blanco, it's their more aged expressions that appeal to me with this brand.  When you ask any tequila snob about this brand, you'll most likely hear about their cask blends or their single estate anejos.

In Tequila Ocho Blanco, the terroir includes agave growth along the fertile Lerma River basin that empties into Lake Chapala. The farm Rancho La Riviera is located 1,600 meters above sea level, and the soil is similar to that of Tequila Valley. Each vintage of Tequila Ocho Blanco has an extremely limited run, but the earthy character of the vintage stands out as the primary draw for true tequila lovers. The vintage is an excellent choice for sipping.

While most people will skip over the reposado expression, it's not one to sleep on.  Aged in American White Oak barrels, Whisky barrels, and Used barrels, (the used part is unclear to me but it's what's stated on Tequila Match Maker's app), I mainly get notes of cooked agave, vanilla, oak, and pepper.  It's a nice sipping reposado that most people I have shared it with agree has a nice short finish with a light burn.  Other notes you may find strong hints of citrus and butter.  Overall, a very nice agave forward sipping reposado.

Most tequila brands are distilled to remove the flavor notes that make a vintage interesting to connoisseurs, but the single-estate Anejo tequila delivers outstanding flavor notes and nuances that other tequilas can’t match. The unique vintage celebrates the ranch, region and industry loyally by delivering the personality of the soil and climate.

It's difficult to compose a full list of known single estate Tequila 8 anejo's, but from memory a the help fo the Internet, here are some that I know about.  I'd love to see comments if I missed any or if there are updates to this list.

You'll see that a lot of these are higher ABV by volume.  Some are up to 110 proof.

The above pictured tequilas are all incredible:

On one issue, the reviewers tend to agree. This is one of the finest sipping tequilas available, and connoisseurs insist on slowly sipping the beverage even when they might have trouble standing because of the alcohol. Detecting different flavor notes in every sip is a quite common experience. One review noted that the reviewer seldom gushed over any spirit, and he then proceeded to do exactly that by comparing the experience to the ultimate truth of agave: the sepia-toned tequila terroir that distinguishes Mexico tequila production from the misguided efforts of other liquor promoters.

The particular vintage that won these accolades was a 2012 tequila that was aged exactly one year and 19 days. The tequila turned the color of straw and called to mind agave, wild florals and caramel overtones with a touch of minerals from the earth. The light flavor belies the strong influence of barrel aging, which balances the tequila perfectly.

Tequila Ocho Extra Anejo Single Estate has received similar reviews to the overwhelming favorable opinions expressed by reviewers of Cask Finish Tequilas. Terms like “hints of orange blossoms, butterscotch, caramelized agave and cassis” and “a finish of tingling cloves, pepper and nutmeg.” Aged for 3 years, his tequila ranks among the most rarefied sipping liquors, and its desirability is only enhanced by the limited run of its brightest vintages.

This was a recent find for me and I dug in to fully understand what the “La Latilla” rancho was all about.  Apparently the rancho has a gentle slope to the east that gives off an incredible afternoon sun exposure.  The 2015 date comes from the agaves that were harvested in late 2014 and early 2015 when they were seven years aged.  It's also said that the agave content was 32% higher than normal.  This tequila was aged in used American Whiskey barrels for a minimum of one year.

Obviously, you can see I enjoy this brand.  In fact, it's one of the few brands that I dedicated an entire page to because they encompass so many different tastes with their range of expressions.  One of the other brands I've done this with is Don Julio.

Tequila Ocho is an additive free brand that has become a force among top liquor manufacturers, and its small-batch status only increases the appeal to connoisseurs of fine tequila. Unlike traditional manufacturing, Ocho doesn’t modify agave flavors to match the lowest common denominator of tequila preference. The brand is made to appeal to those looking for something unique.

The blends are as appealing as the basic blanco and 3-year aged Anejo. Each tequila delivers a unique personality, and all Ocho tequilas are suitable for sipping, mixing up signature cocktails and gourmet cooking recipes if you desire to use a fine tequila for that purpose. Although the brand is fairly young in terms of long-revered top brands, Ocho gains new converts at a fantastic rate. Try one of these tequilas today to see what all the fuss is about. You’ll be glad you did.