Tequila, Jalisco Guide and How to Get There 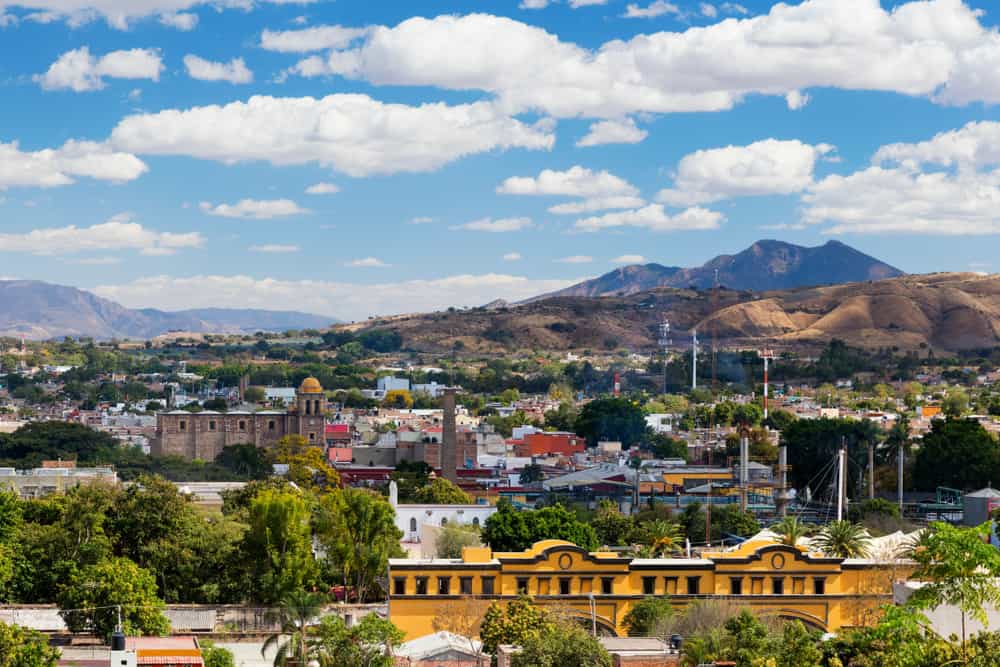 Today I'm offering up my guide to the town of Tequila, located in Jalisco, Mexico.  You'll find tequila tours, where to stay, what to eat, and what to do in this comprehensive guide to Tequila, Mexico!

But first, a little history of the town of Tequila.

The first indigenous peoples to inhabit the Jalisco area did not have a unified culture, but they shared the tradition of building shaft tombs for the elite members of their societies.

Shaft tombs from the Teuchitlán culture (350 BCE to 450 or 500 CE) are associated with the building of guachimontones such as those found at the Los Guachimontones Cultural Site in Teuchitlán.

The town of Santiago de Tequila was founded by Franciscan monks in 1530, and the monks moved indigenous people from the Chiquihuitillo Mountain area (an area now named Tequila Volcano — an inactive volcano) to inhabit the town. In 1541, the residents of the area revolted against the Spanish, but the uprising was suppressed.

The town of Tequila is located in the state of Jalisco, 60 kilometers from the city of Guadalajara, and, as you might expect, it is the birthplace of the drink, Tequila.

Agave is a plant that is native to the area that is also used to make cloth. However, the native people used the sugars from blue agave to make a fermented drink called “mescal” then or “pulque” today. The Spanish also began producing the drink by blending native and European distillation techniques In 1600, they established the first massive agave growing operation and large-scale distilling operation. The drink was called Mezcal wine until 1873 when it was renamed Tequila to differentiate it from the Mezcal that was made in Oaxaca in southern Mexico.

Because of the drink and its history, the town of Tequila has been named a World Heritage Site.

Among the sites to tour Tequila Jalisco are the agave fields and distilleries. Many tours are available along the Tequila Route and tastings are included at many distilleries. Some of the distilleries that you might enjoy are the Quinta Sauza with its beautiful garden and the La Perserverancia with a huge painting and a museum.

You can also visit archeological sites of the Guachimontones culture, obsidian and opal mines, and old mansions.

If you enjoy museums, explore the Museo Nacional de Tequila, the first museum exploring the history of a liquor, and the Museo Los Abuelos Familia Sauza which was the home of the founder of the Sauza distillery.

Religious sites include the 18th century Our Lady of the Purísima Concepción and Santuario de Santo Toribio Romo.

Historical and architectural sites of interest are Antiguos Lavaderos and the Hacienda El Centenario.

Things to Do in Tequila Jalisco

The things to do in Tequila Jalisco include the nightly blessing of the town by the priest at Parroquia Santiago Apostol, the National Festival of Tequila, Balneario Natural La Toma, and the Los Guachimontones Cultural Site.

When you visit Tequila, be sure to observe the nightly blessing of the town. At 9 pm every night, everyone in town stops whatever they are doing for the blessing of the parish priest of Parroquia Santiago Apostol. Televisions and radios are turned off and everyone stands. When performing the blessing, the priest tolls a bell three times and turns to face each of the four cardinal points while holding the holy of holiest cross with the sacraments.

The National Festival of Tequila

If you visit Tequila from the end of November to mid-December, you’ll be there to attend the National Festival of Tequila. Tequila also celebrates the feast of the town’s patron saint, Our Lady of the Purisima Concepción, during the same period.

The National Festival of Tequila includes the crowning of the Tequila Queen, parades with floats, charreada events, cockfights, fireworks, rides, and performances by mariachis. You’ll also be able to sample Tequila from all of the town’s main distillers.

Balneario Natural La Toma offers an eco-tourism site with a natural spring surrounded by vegetation and a view of the canyon. The surrounding rugged terrain of the cliffs provides the opportunity for paragliding, rappelling, and similar activities. Some gold, silver, and opal mining also occurs around Balneario Natural La Toma.

The water park includes a springboard for diving and a parking area. It’s located 2 miles or 3.21 kilometers from the center of Tequila, and it’s open daily from 7 am to 6 pm.

The Los Guachimontones Cultural Site in Teuchitlán represents only one of many archeological sites in the area, but it is notable for the size and number of ceremonial buildings discovered there.

Guachimontones are circular temples consisting of a patio-like circular base and a ring platform that’s called a banquette that serves as a base for an even number of quadrangular building-like structures of varying designs. The ring platform and quadrangular platforms surround a circular stepped altar at the center of the patio.

The shaft tombs associated with the guachimontones of the Teuchitlán culture were also built by other cultures who inhabited Western Mexico. They consist of vertical or nearly vertical shafts ranging between around 20 to 65 feet that end in low-ceilinged chambers that might vary widely in size but generally measure 13 feet by 13 feet. The tombs were used for multiple burials of the same family, and solid and hollow ceramic figures were buried with the dead.

Because these tombs were frequently raided with the figures then being sold to collectors, dating the tombs was difficult at first, but it’s now believed that most of the shaft tombs date from 300 BCE to 300 to 400 CE. The end date of this cultural tradition is still debated as are the reasons why shaft tombs of the Teuchitlán culture were associated with the guachimontones.

The Matices Hotel de Barricas, located in Tequila, offers some traditional rooms and some rooms that are in separate barrel-shaped buildings. It provides free Wi-Fi, air conditioning, free shuttle service, concierge service, a 24/7 front desk, horseback riding and rentals, room service, a restaurant, and a bar.

The Capital O Hotel Posada Terraza is located in the center of Tequila. It’s pet-friendly and offers free Wi-Fi, a 24/7 front desk, concierge service, a picnic area, and a playground.

The Hotel Solar de las Animas, located in Tequila, has free Wi-Fi, air conditioning, room service, a 24/7 front desk, business service, a restaurant, a bar, a laundry, a gym, a pool, and a spa.

The restaurants in Tequila, Jalisco from which you can choose include the La Antigua Casona, the Cholula La Fonda, and the Real Marinero.

The Real Marinero, located in Tequila, offers a menu that includes Mexican and seafood dishes.

You can travel from Guadalajara to Tequila by one of two distillery-operated trains, by bus, by taxi, or by car. However, there is no direct bus route between the two cities, so traveling by bus requires transfers.

You have two choices for the Guadalajara to Tequila train — the Cuervo Express and the Herradura Express. The trains are comprised of four or five cars and offer the choice of three different passenger classes with different amenities. The amenity differences include types of seating, types of entertainment, and types and amount of food and beverages available. The train excursions are popular and can require advanced booking.

When traveling from Guadalajara to Tequila time depends on the mode of travel. The train trips are all-day excursions. The bus trip takes one hour and 59 minutes. Driving or taking a taxi takes only 44 minutes.