Today I examine the evidence that tequila is a healthier drink of choice when compared to vodka.

Over the course of my life I've been a drinker.  I started off with beer, drinking the Midwest's finest lager's and pilsners, mainly sticking to Michelob Golden Light, which is a regional product of Anheuser Busch, and Leinenkugel's Honey Weiss.  As I grew older, I gravitated towards rum, going into the Flor de Cana brand and eventually into a Venezuelan rum called Diplomatico.  When I looked at all the sugar consumption going on there, I started drinking vodka with soda.  Grey Goose, Tito's, Ketel One, I drank just about any of them interchangebly.

When I had my son in 2005, I had a lot of time during the pregnancy to experiment with tequila.  I started noticing that the day after sipping tequila, even in large quantities, I felt better when compared to vodka.  Many years later, I'd probably say 2018, as it became more popular, I started drinking blanco tequila's during the day as a day time sipper.  Based on the fact they didn't need any soda to make it taste great, Don Julio Blanco on the rocks became somewhat of a normal thing for me to sip on while enjoying Florida's great scenery.

It seems like a distant memory when I drank vodka exclusively, but looking back on it, it looks like it was a good move to switch to tequila.  Let's get into the health facts surrounding vodka calories as well as the amount of calories in tequila so you can make an informed decision on which spirit is healthier. 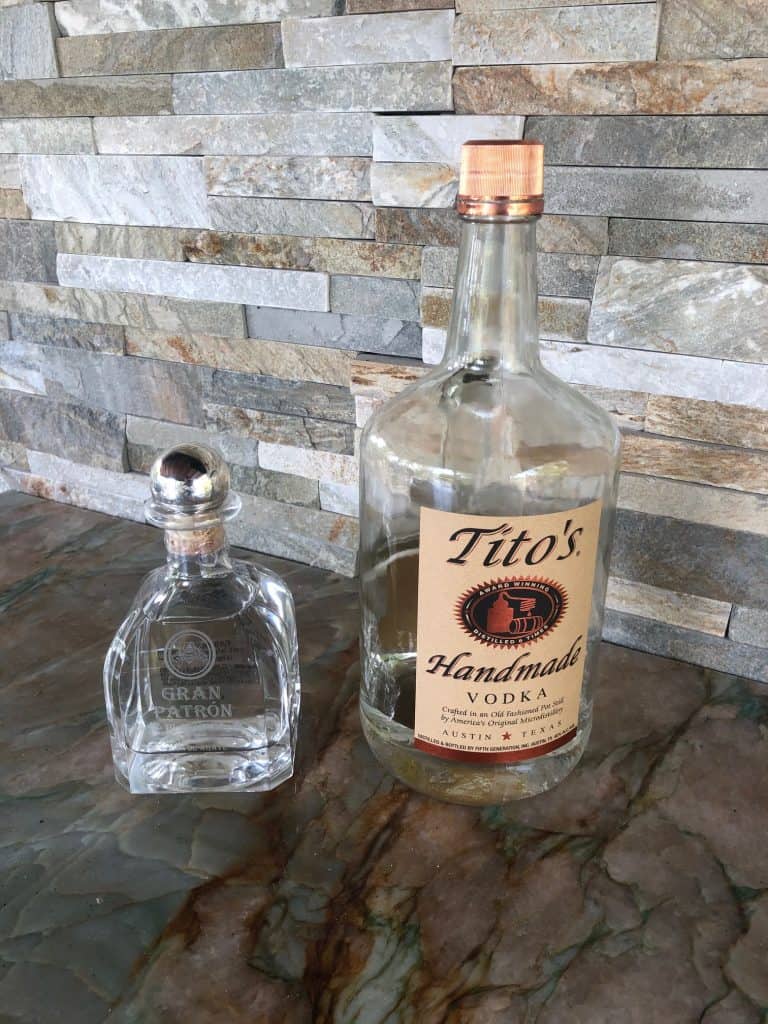 When you compare a shot of tequila to the same amount of vodka, you win on calories alone.  Vodka will come in with an average of 96 calories, while tequila has around just 64. This was reported in the NY Post story I cited below, but upon doing my own digging, I found other information.  Being a fair person, I only felt it's proper to convey more than one person's point of view on this controversial topic!

Next, let's look at the same pour in Tito's vodka:

The calories in Tito's vodka is a tad bit higher.  Nothing crazy, but read on to see why vodka mixers won't help any further.

Again, I'm all about fairness, and although I do prefer tequila, I spent many years on the vodka train and many of my close friends are vodka drinkers so I felt I better get my facts straight!

Of course, this will vary depending on which exact brand and type of tequila you consume, but for simplicity sake, we're using averages here.  Also, tequila is made with agave and will be naturally sweetened.  There are no artificial additives needed with tequila, and most drinkers of tequila will do so without any sugary mixer.  When you add in mixers, that's where you'll really see calories add up, in addition to the carbs.

For me, I simply don't enjoy vodka on the rocks the way I enjoy tequila neat or on the rocks.  When you add in the fact that most of my friends feel the same way, tequila wins because there is no need for mixers.

As I discuss thoroughly in my article “10 health benefits of drinking tequila,” I'm assuming we're drinking 100% agave tequila in these instances.  If you don't, throw all of this data out the window.  Only drink quality tequila, because the low end stuff will make you end up with the worst hangover you've ever had.  Especially if you add a subpar margarita mix!

Another thing I pointed out in the above article is that tequila will not make your blood sugar spike.  The soft sugar is to credit here.

Yet another item discussed in the piece above is that if you take medication, you can rely on it getting to the colon safely.  This is because the blue agave creates a protective barrier and helps stop the medication be diluted in the stomach.  Personally, I'm on some medication for blood pressure and I take comfort in this fact!

Tequila is also free of glutens.  Very few vodka's can say this.  You won't find any wheat or barley in tequila like you will in other spirits.

No matter what you choose to drink, do so responsibly, and among good company.

Tim is tequila addict with a growing love for mezcal. While not in his day job of Marketing, he's made it his goal to entertain, educate, and bring joy to the agave lovers across the world with product reviews, hot takes, and tequila travel stories.