Don Julio is one of the best known brands of tequila in the United States.  They rank right up there with Patron Silver as far as popularity goes.  I’ve always been partial to Don Julio tequila, mostly because I usually buck popular trends and never go with the masses.  Some would say I’m contrarian, but with Don Julio, there’s a story that goes well beyond trying to be different.

I had just moved to Miami.  South Beach, to be exact.  The year was 2002, and in my first weekend of drinking on the town I was fortunate enough to befriend a girl from my home State of Minnesota at the famous Clevelander bar on Ocean Drive.  Having Minnesota memories and a love for Vikings football in common, we struck up a friendship. 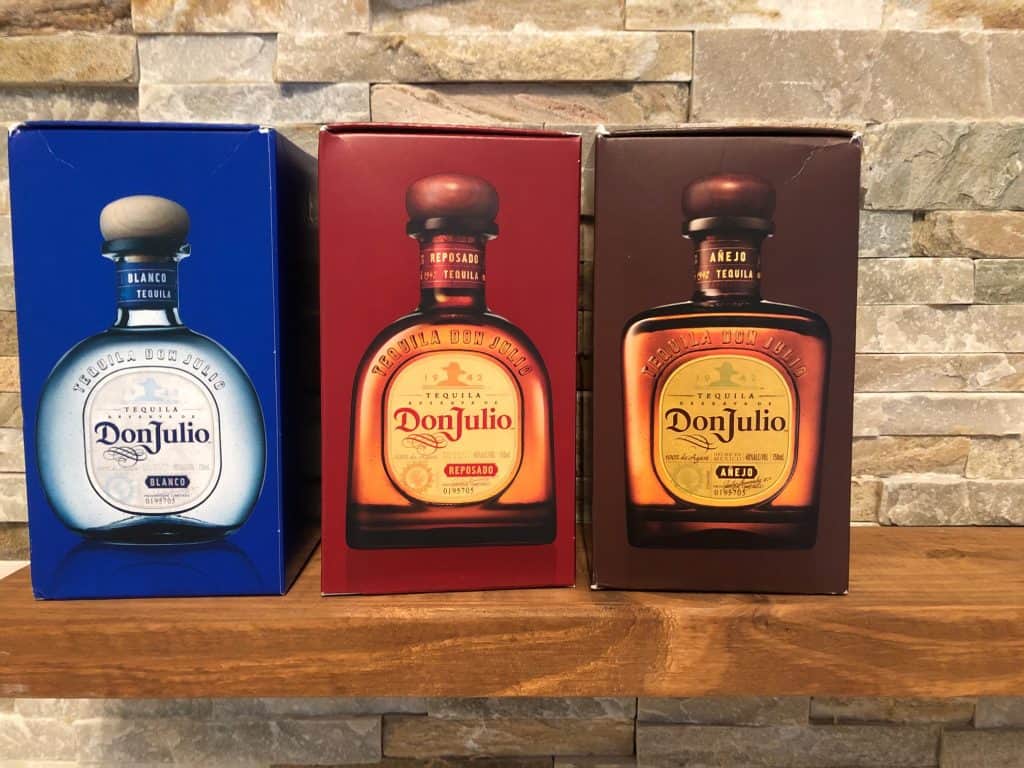 Weeks later, I found myself invited to a new experience for me – a Wednesday night at the Forge.  This was a long running Miami party scene and one of the top places you could see, and be seen, at that point in time.  As a staff member there, my friend had some serious pull.  I had two friends visiting town and as three guys going out in Miami, we had literally no shot to get any VIP treatment without spending $5,000 at this place.  However, with my friends pull, we had the run of the place and got premier seating.

Turns out the women sitting right behind us were from Mexico.  They were stunning!  I’d been in Miami long enough to know and see the gorgeous women all around, but these women were special – they were drinking tequila – and not a single other drink!

They had a bottle of Don Julio on the table, and instantly I felt compelled to have some of that tequila.  Bravely, I befriended the women and we were soon talking (broken) Spanish and enjoying Don Julio the way it’s supposed to be – NEAT.

This may have been my first foray into the Don Julio tequila brand, but it wasn’t my last.  The unique bottle and the memory created the first time I saw it drank like that made an impression.  Couple that with the fact I always go against the grain and against the masses when it comes to anything, and this was going to be a brand I stayed with.

Like most large tequila producers, the brand offers a blanco, a reposado, an anejo, a 1942, and for an encore, the Don Julio Real.

They call this their signature tequila, and to me, it represents one of the best blanco tequilas that’s widely available.  This is literally the unaged agave base tequila used that all of the other Don Julio derivatives are made from.  The hint of citrus notes that feature lemon, lime, and grapefruit make this a perfect sipping tequila made simply on the rocks, or as the base in your margarita.  This one drinks light and sweet from start to finish. 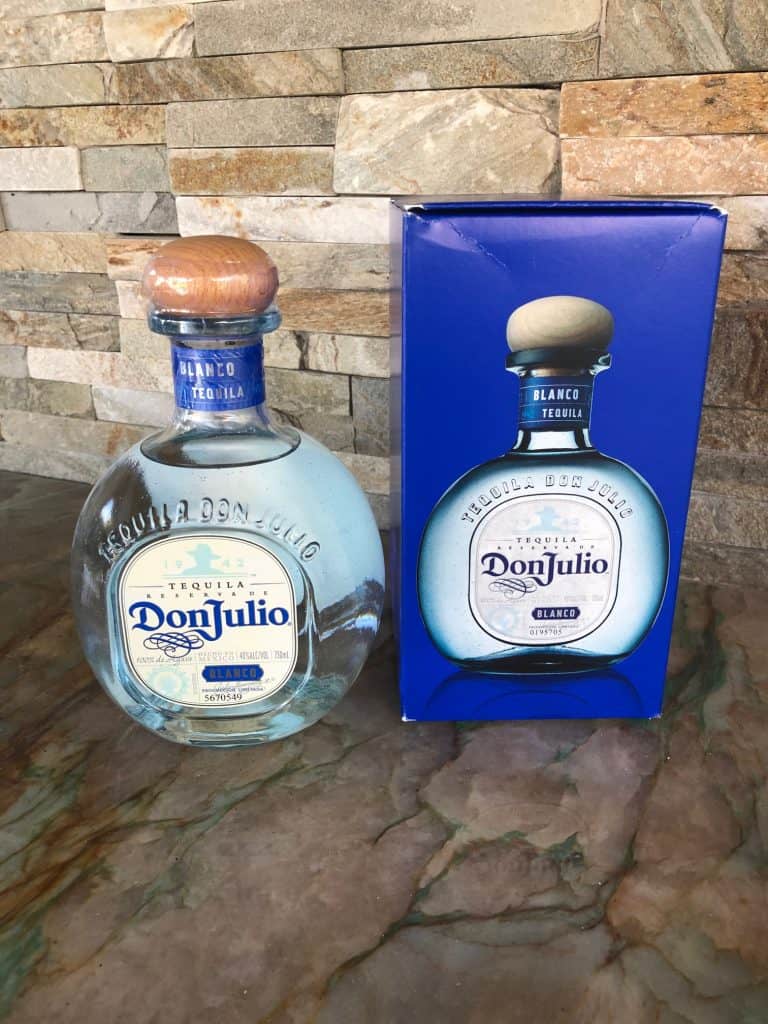 This golden amber reposado is aged eight months (four times the industry standard) in American white-oak barrels and like the blanco, can be enjoyed on the rocks or as part of a craft cocktail.

When it comes to the nose, you’ll get an aroma of lemon citrus surrounded by spice layers and according to their own website, touches of ripe stone fruit.

The taste is smooth and you’ll get both dark chocolate and vanilla in this, and even some light cinnamon.  The finish features dried fruit, nuts, and even a hint of caramel apple.  (I don’t get that in my experience, but that’s what their website says.) 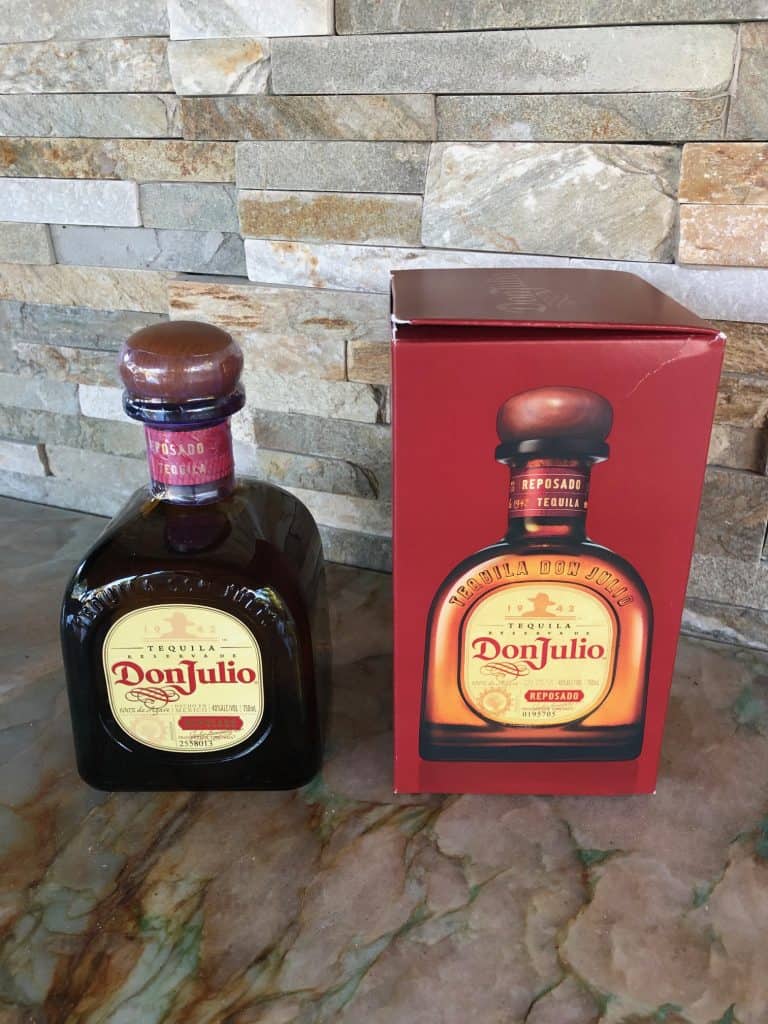 As a primarily anejo tequila drinker, I really enjoy this aged 18 months tequila, made in the same American white-oak barrels as the reposado.  You’ll taste the agave along with wood and vanilla in this crisp, complex anejo tequila that should only be enjoyed neatly in a snifter or on the rocks.  Don’t you dare make cocktails with this beauty! 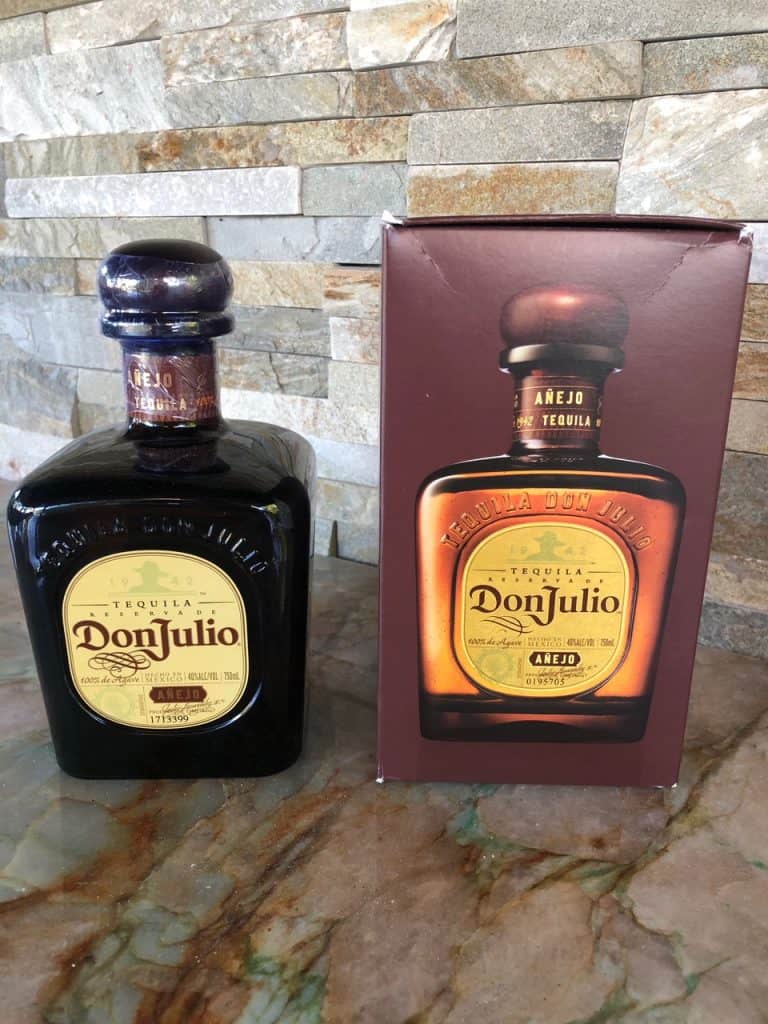 Drinking this neat will allow you to taste the butterscotch and honey notes that this anejo provides, and when you get to the wild honey finish you’ll know you just enjoyed one of the best anejo tequilas.

If you haven’t ever seen or experienced a clear anejo tequila, that’s because this is the first one ever!  You can only buy this in the US and Mexico, and the 1970 represents 70 years of developing smooth blancos and complex anejos and bringing them together for one amazing libation.  Don Julio 70® Añejo Claro Tequila is aged eighteen months in American white-oak barrels and subsequently filtered in order to maximize the flavor from the agave. 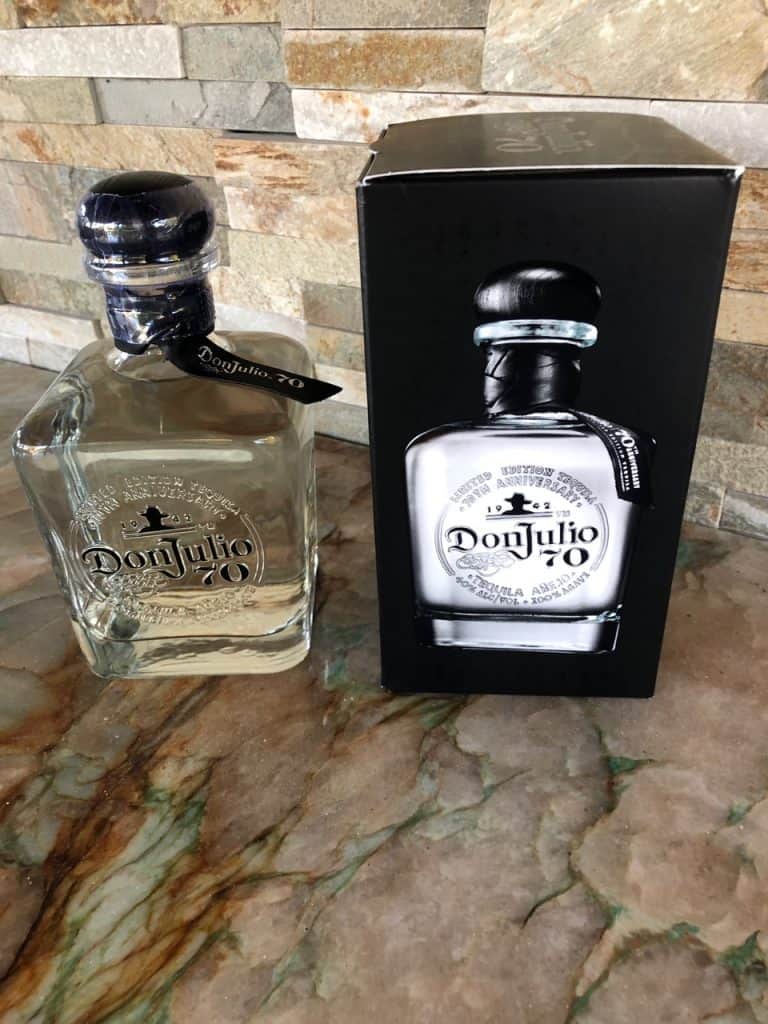 This smooth tequila features the vanilla and honey from the Don Julio Anejo, while finishing with a clean oak taste.

Enjoy this neat or with a Topo Chico Mineral water, which they call a Don Julio 70 & Soda.

Perhaps the most famous in the entire line of Don Julio tequilas is the 1942 edition.  This is the go-to tequila that you’ll find at high end cocktail bars, lounges, nightclubs, and discotecas.  Made in small batches and aged over two and a half  years, this tequila honors the year when Don Julio Gonzalez started making tequila.

Soak in the caramel and chocolate in the nose, then taste the roasted agave, vanilla, and oak, and let the lingering oak and warm vanilla finish be something of top class luxury to be enjoyed on the rocks, or neat.

Founded in 1947 by Don Julio Gonzalez, the Real uses seven to ten year hand picked blue agave from the highlands of Jalisco, Mexico.

Enter the “Real” – the top tequila made by the company.  Aged three to five years in American White Oak barrels, this is the pinnacle of the brand’s six tequilas, and the one that I enjoy most.

This is just about as smooth of a tequila that money can buy. It comes in at a price tag north of $300, and often approaches $400 depending on availability. I’ve seen it around town at all sorts of price points, but $379 or so is usually where I find it priced.  The downside is it’s a small bottle, only 375 ML, but don’t let that bother you – every sip of this is pure delight.  If i’ve ever seen a true commodity in buying tequila in South Florida, the Real is truly a commodity.  I’ve seen a price variance of $350 – $479.  Even the large, well-stocked Total Wine rarely has more than two bottles in their locked display.

Technically, this is an “extra anejo,” and anyone who follows tequila knows there aren’t many of these available.  Cava de Oro is one I reviewed earlier.

I first rewarded myself with this expensive tequila when I sold a property.  I enjoyed the Real so much that I bought a second bottle within days of purchasing (and finishing) the first.

While I’ll always advocate drinking fine tequila neat (without ice or any mix) – it would be an absolute SIN to drink the Don Julio Real with a drop of anything added to it.  In fact, if anyone is at my house enjoying this with me, I forbid them to do so.  If you want to mix something at my house, go to a lower tiered silver tequila like a Milagro.   That’s still a great tequila, don’t get me wrong – but I have a problem going to the absolute cheapest tequilas, even when I’m making a margarita.

The color of this is very golden and pleasant.  It reminds me of a perfectly crafted microbrew.

I’m admittedly not much of a “nose guy,” but I get nice hints of toffee and caramel when I smell and taste this tequila.  The official Don Julio Website says the nose is “a mature aroma balanced with gentle hints of citrus and cooked, sweet agave.”  I wouldn’t know what cooked agave is, I’m not that far into my knowledge!

The website profile continues to talk about the taste :

I totally get the vanilla and caramel, as noted earlier in my review.  Chocolate isn’t a flavor I entirely experience, but it sounds delicious, and that’s exactly what this tequila is.  Almond, yeah, I totally get the almond now that I sip on it more and really seek that taste.

I can’t talk about how awesome this tequila tastes.  I could drink it, and have drank it – in many settings.  Most memorable include having it neat with a cigar and Papa John’s pizza at midnight as a night cap.  Nothing like having  a $350+ bottle of anejo with a two for $19 pizza that exits the body within 9 hours.  Pretty classic if you ask me, but that just creates a great story.  I personally enjoy this best with a cigar and nothing else.  Enjoying both of those at the same time is simply bliss.

Now, to the presentation:

The bottle of Real is among the most well done on the market.  Complete with a very heavy, sturdy cap that could double as a hitch for a truck, this thing is a thing of beauty.  It’s pure art.

Sold in a very durable, thick box that revolves around and is so well put together I don’t even throw it away, everything is done to the nines.  Two silver agave leaves that could pass as small hands drape the front of the bottle, almost holding it in place like a work of art.  The attention to detail is unparalleled, which clearly shows why it’s Don Julio’s marquee tequila.

This bottle of tequila MUST be on your bar and in your collection. 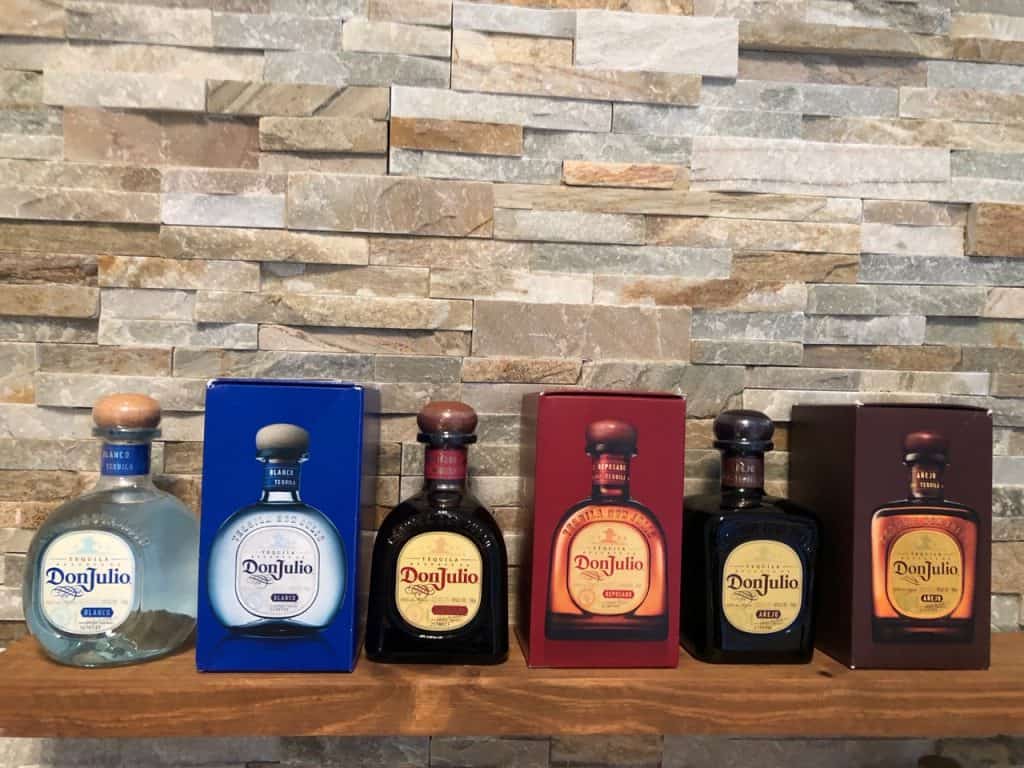 As if the impressive roster of tequilas isn’t deep enough and with enough primo tequilas, Don Julio went out and made some very limited edition versions of their reposado tequila that I haven’t been able to sample.  I will be covering them when I am able to add some to my collection, but for now, I’ll just leave you with the names:

I’ll be back soon covering more about these limited edition tequilas and always keeping a pulse on the Don Julio tequila brands.