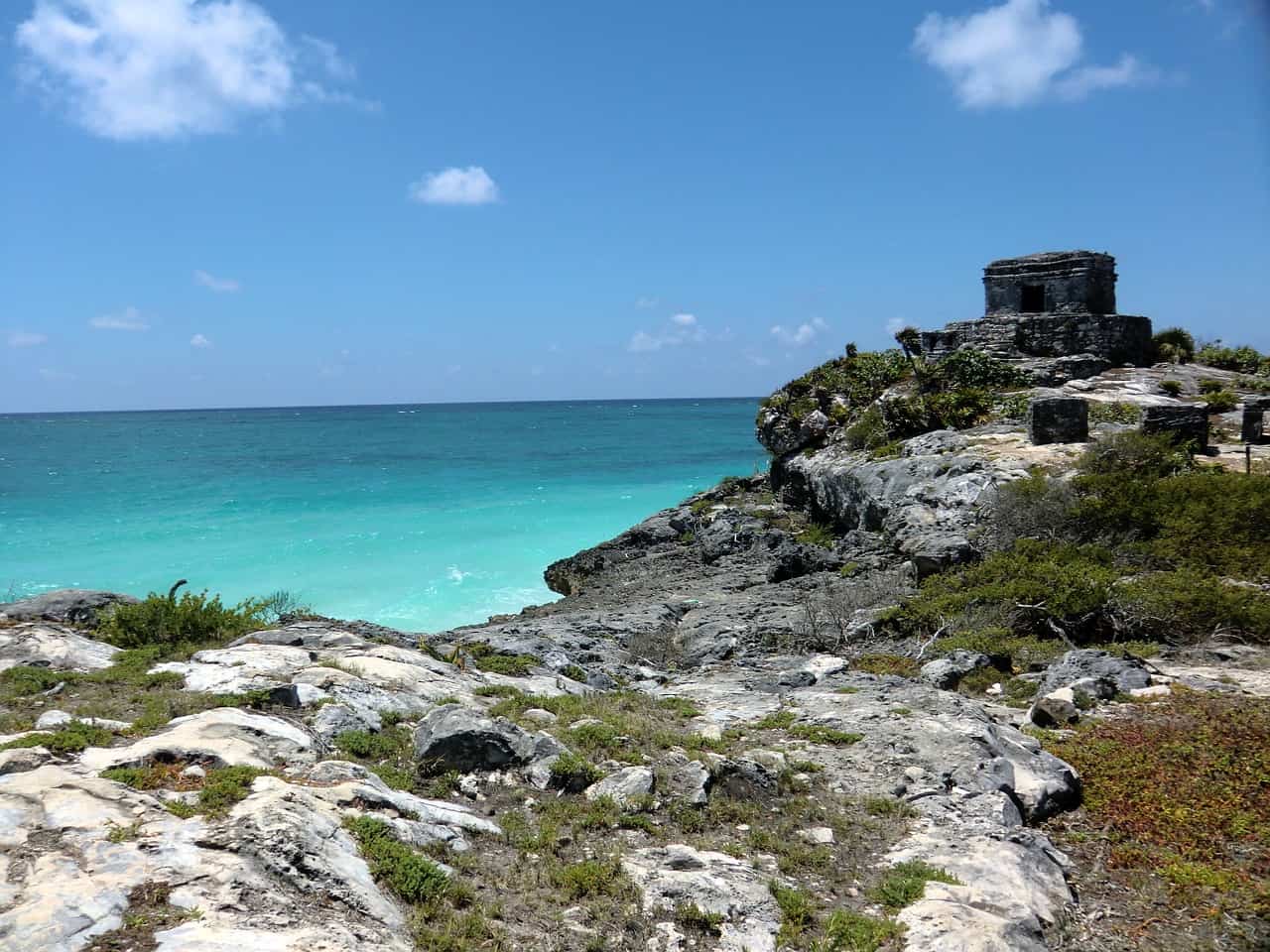 Have You Experienced the Majesty of the Mayan Ruins of Tulum?

The Tulum Ruins is a destination in itself. Millions of visitors are awed by the only ruins on the beaches of the Caribbean in the Riviera Maya. The ruins mean “wall” in the Yucatec language, referring to a large barricade constructed around the settlement. The Tulum archaeological site was referred to as “Zama” by the Mayans, meaning “dawn”, perhaps as a reference to its eastern location.

In 1841, explorers Catherwood and Stephens apparently gave the name “Tulum” to the site in 1841. They visited the site long after the city was abandoned and just before the start of the Caste War in 1847. Their famous book “Incidents of Travel in Yucatan” covers their adventures in Tulum. An important side note to this story is the actual credit for the rediscovery of Tulum was by Juan Jose' Galvez in 1840.

A stela, a type of commemorative slab with an inscription, contains the first known date for the Tulum site of A.D. 564. This date places the site within the Classic Period, although we know the Tulum heyday was later around 1200 – 1521 A.D., the Late Post-Classic Period.

Tulum became the center of Maya's extensive trade network due to its location. Maritime and land routes converged at Tulum with artifacts confirming contacts with Central America and Central America. Among the artifacts discovered by archeologists included rings and copper rattles from the Mexican highlands, jade from Guatemala, flint and ceramics from the Yucatan.

Tulum became an important international trade hub and responsible for distributing goods into the Yucatan through Chichen Itza, Coba, and outlying settlements. It was believed the Tulum walls protected the sacred leaders in Tulum and became an important religious center.

Evidence discovered by archaeologists pointed to the population being killed off by the Spaniards. They introduced Old World diseases into the area as a method to kill off the native population. Inhabited for around 70 years after the Conquest, Tulum was finally abandoned. Documentation of the Tulum demise is found in the writings of Friar Diego de Landa's “Observations on the Yucatan Peninsula”. Incense was continued to be burned and prayers given at the Tulum temples by the local Maya until the late 20th century.

Primary Structures of the Tulum Site

* El Castillo
Upon arrival at Tulum's ancient pre-Hispanic site, the first building seen were the city's main center where political and ceremonial activities were conducted. Surrounding the wall were several thatched wooden houses where workers lived although little evidence exists of these residences.

The City Square, El Castillo, is The Castillo, or at times referred to as the lighthouse. This is the tallest building in the Tulum settlement and is the most famous with a spectacular view of the ocean and coast from its position on the forefront of the bluff.

The famous building has gone through several construction stages with a plumed serpent motif carved into the upper rooms. The vaulted rooms are built in the classic Mayan style with a tiny cove at the foot of the Castillo for offloading trading canoes.

* Temple of the Initial Series
The temple facade has many stucco sculptures and the stelae that contained the earliest Tulum site date was discovered in this building. The Temple of the Frescos contains murals adversely affected by time and elements. Traces of several building styles are found within the temple.

* The House of the Columns
This structure is more complex than most of the structures found at the Mayan ruins. The House of Columns appears to be a palace-like structure where the four rooms' main entrances are facing South. The magnificent building has six columns supporting the top sanctuary and roof.

* The Port and Beach
At the base of the Tulum Ruins is a beach that is an important part of the settlement of Tulum. Mayan ships that traded around the Yucatan Peninsula would dock at the beach port. Today, the ancient beach port is a paradise for swimmers, snorkelers, and relaxing on the beach.

Why We Love the Tulum Historical Site
You don't need to drink tequila to put on a smile in Tulum!

We love the beautiful Caribbean waters and this alone makes Tulum a very special place to visit. A magnificent and historical heritage site next to sparkling Caribbean waters is a combination for us made in heaven. In addition, the historical information provided about Mayan history is first-rate with an introduction to the history of the Maya by INAH upon entering the Tulum site.

Your time can be well spent visiting the beaches and pueblos of Tulum. The Tulum area can be explored by easy day trips to town or the beach and many beachfront hotels are available to serve visitors.

Mexico has many historic sites that are highly desirable tourist destinations in the Tulum area including the Coba Mayan Ruins, and the Chichen Itza Mayan ruins.

* Coba Mayan Ruins
Located close to Tulum, Coba Mayan Ruins have become a favored destination for Mexico travel itineraries. Ensconced within four natural lakes well hidden in the jungle, Coba was once believed to be the most powerful city in the region and at its peak had a population of over 50,000 residents.

Coba is famous for having the largest network of stone causeways discovered in the ancient Mayan world. The roads, called “sacabes” (white roads), have been discovered and so far over 50 of them transverse the site with 16 open to the public. A unique thrill for the adventurous tourist is climbing one f the few Mayan pyramids still open to the public for climbing. Part of the Nohock Mul group of buildings, the Ixmoja pyramid is open, for now, for climbing. For a unique thrill, the Ixmoja is 43 meters (138 feet) high and provides an exhilarating view of the area, if you are brave enough to climb it!

* Chichen Itza Mayan Ruins
Chichen Itza may be the most famous of Mayan Ruins Mexico. Located in the Yucatan Peninsula, the ancient town had a large, diverse population with a variety of architectural styles. Although somewhat remote, there are plentiful tourist buses from Cancun or a 74-mile drive in a rental car.

The Pyramid of Kukulcan is perhaps the most famous Mayan pyramid and was built around 800-900 CE. The pyramid was dedicated to Kukulcan (or Quetzalcoatl), the “feathered serpent god”. The amazing and crafty architecture of the pyramid works with the rotation of the earth to project a “feathered serpent” working its way down the 364 steps. Twice a year during the spring and autumn equinoxes, one of the unique visions in the world appears. Due to the perfect combination of architecture and equinox lighting, the “descent of Kukulcan” is represented by a serpent slowly working its way down the 364 steps. A sight to behold with stunning pageantry and one for the “bucket list”.

1. Palenque
A World Heritage Site located deep in the jungle of the State of Chiapas. The city of Palenque is famous for being known for its sheer volume of inscriptions providing valuable insight into the Mayan culture. The famous Temple of Inscriptions is located in Palenque with hundreds of hieroglyphics. For the sci-fi adventurer, the world-famous “ancient alien astronaut” illustration is found in the Temple of Inscriptions.

2. Bonampak
The Mayan site Bonampak, meaning “painted walls”, is located in Chiapas. A journey of about 2.5 hours from Palenque rewards the visitor with a structure containing vibrant, colorful murals. The murals estimated to be 1,000 years old is considered the finest example of preserved murals in the Mayan world.

3. Ek' Balam
Located about 51 kilometers (32 mi) northeast of Chichen Itza, Ek' Balam is a mysterious site banned right after its peak in the 8th century. A visitor will be greeted with beautiful pyramids, a Mayan ball court, and even an Acropolis. The main pyramid sits atop the Acropolis and features a massive jaguar mouth (Ek' Balam translates to “the black jaguar”), winged shaman figures, stucco skulls, and many other decorations. The massive structure is one of the largest in the Mayan Yucatan, measuring 200 feet wide, 500 feet long and 100 feet high.

4. Yaxchilán
Reaching Yaxchilan is an Indiana Jones adventure, complete with traveling to the Usumacinta River in Chiapas on a bus, then catching a boat to the ruins. But the payoff for the adventurous traveler is a jungle city with over 120 buildings including a Great Plaza, a Grand Acropolis, and a Small Acropolis. The visit Is rewarded with vast amounts of carvings, stelae (inscribed stone slabs), and murals. A true adventure to embark upon, but highly rewarded with some of the best carvings of any Mayan city.

5. Uxmal
The ancient Mayan city Uxmal is outside the city of Merida in the Yucatan. The name Uxmal translates into “Thrice Built”, which is a reference to the tallest structure in Uxmal, The Pyramid of the Magician. The Pyramid of the Magician was built on top of previous pyramids and was at its peak around the 10th century, then abandoned in the 15th century. Uxmal is a UNESCO World Heritage Site and spans about 150 acres including several structures open to the visitor for climbing.

The Best Mexican Restaurants in the USA